La Musica has been reaching out to include the youth of Sarasota County for the last 23 years. This program has expanded and developed various attributes, beginning as a special live performance performed by La Musica musicians for third graders who were bused to a central location. It then evolved into a recorded performance available for K-12 students throughout the school district. Beginning as a program that 2,000 students at most could attend, we are now available to all students thanks to videography. The Woman’s Exchange has been our support since the beginning.

In 2009, La Musica expanded its educational outreach to include upper level music students who were invited to a special afternoon rehearsal, after which they met the musicians to talk about careers in music. This was funded through the Wachovia Foundation. The students also received free concert tickets. 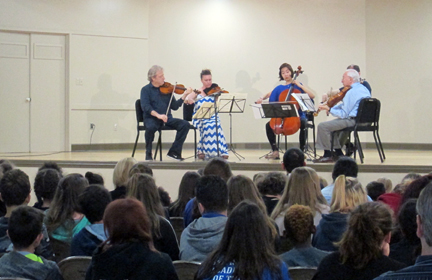 2015 marked a major change in our program. For the first time, we premiered a student composition, Piano Trio No.1, “Emotions,” by Out-of-Door Academy sophomore Nicholas Murphy. In 2016, in celebration of our 30th anniversary, our musicians performed at Booker High School. The piece, “Quintet for Piano and Strings, Op.30” by Jerry Bilik, had its world premiere the day before at the La Musica festival. The composer was present and talked to students about his work. In 2017, we returned to Booker High School to present a collaboration with GuitarSarasota, featuring the outstanding classical guitarist Jason Vieaux, and the musicians of La Musica in concert and conversation.

In 2018, our program expanded once again. We partnered with Sarasota Academy of the Arts (SAA), a public charter school founded for the advancement of visual and performing arts for grades K through 8. Julie Rohr McHugh, director of SAA, along with teachers from Out-of-Door Academy and Sarasota School of Arts and Sciences, brought students to the Payne Park Auditorium for a La Musica concert, arranged specifically for them, which also included an interactive component and study materials.

We are honored to have outstanding music education specialist, Karen Johns, as lead coordinator of our outreach program. She makes the performance and subsequent interviews available to all students and teachers through the DVDs and posts learning resources on EdExploreSRQ, which is supported by The Patterson Foundation.

It is more than a love of music we wish to impart to students. We hope to teach young people that no matter the differences in language and ethnicity, chamber music speaks with a universal tongue. It continues to demonstrate that the democratic nature of chamber music is the perfect source from which the growth of understanding and cooperation flows.

Ringling College of Art and Design

From 2003-2013, La Musica worked with Ringling College of Art and Design to hold a poster competition in which students interpreted the theme of each Festival. For the poster selection committee, it was always exciting to see the diversity of student interpretations. The collaboration of the two arts institutions allowed us to explore the relationship of the art forms.

A sampling of the winning posters in recent years designed by students at the Ringling College of Art and Design: 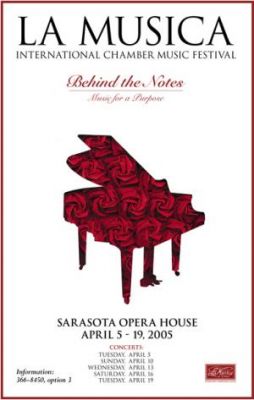 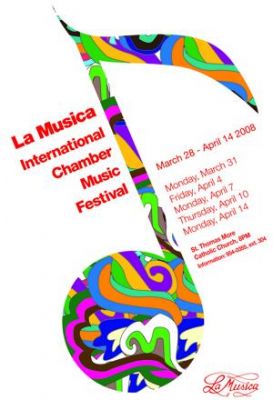 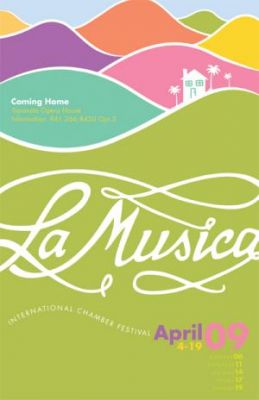 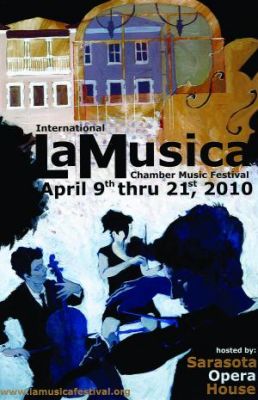 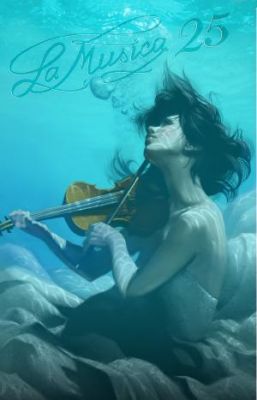 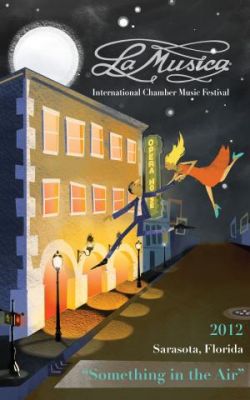 LA MUSICA DI ASOLO, INC., REGISTRATION #CH6585, IS REGISTERED WITH THE STATE UNDER THE SOLICITATION OF CONTRIBUTIONS ACT. A COPY OF THE OFFICIAL REGISTRATION AND FINANCIAL INFORMATION MAY BE OBTAINED FROM THE DIVISION OF CONSUMER SERVICES BY CALLING TOLL-FREE (800- 435-7352) WITHIN THE STATE OR THROUGH WWW.FLORIDACONSUMERHELP.COM. REGISTRATION DOES NOT IMPLY ENDORSEMENT, APPROVAL, OR RECOMMENDATION BY THE STATE.
WEBSITE DESIGN BY